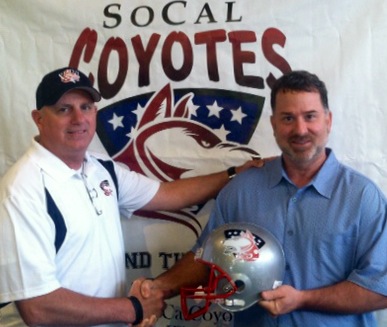 Dr. Roger is the Attending Surgeon and Director of Joint Replacement at the Institute of Clinical Orthopedics and Neurosciences (ICON) at Desert Regional Medical Center in Palm Springs.

He joins prominent orthopedic surgeon Sydney Pardino on the Coyotes, giving the desert champions two of the finest specialists Desert Regional — and the Coachella Valley — has to offer. “Our players are in legendary hands, and for once, we’re not referring to our quarterback,” smiled team president and head coach J David Miller, during an announcement Monday at Desert Princess.

Desert Regional and ICON have launched sweeping desert sports medicine initiatives and are a cornerstone partner of the SoCal Coyotes professional football team.

Dr. Roger holds his Bachelor of Science from Pacific Union College, and did his residency at Albany Medical Center in Albany, New York. He earned his Doctor of Medicine at Georgetown School of Medicine in Washington, D.C. Dr. Roger also works the sidelines during the team’s national games in the Professional Spring American Football League.